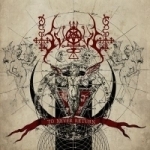 After their EP "Ars Kha" from 2011, Hungarys Anti-Cosmic Metal force SVOID are now back with their full-length debut and it’s time to get ready for more chaotic art. After working on new material S and his allies chose to walk the path "To Never Return". According to the words of S, still the main man and driving force behind SVOID, the songs on the EP were a quest and now, with a full album composed and recorded, they found their way. After listening to both records again and again, it is clear to say that his songwriting has progressed quite a lot in the last time. After the short introducing instrumental ‘Opus Gnosis’ (with a touch of Medieval music like IN EXTREMO), the album starts furiously with the fantastic ‘Eleven Alpha’. The concise, yet raw melody line reminded me of the glory days of old DARKTHRONE, while the groovy, somehow tribal drumming simply kicks ass. All of a sudden, the song changes towards the end and classic Metal roots become manifest. So you can already find the mark of DISSECTION, which runs like a golden thread through the album. ‘Queen Of Those Below’ and ‘Nightless Moon Mistress’ take the same line, melodic Black Metal deluxe, especially the latter one with its fine melody lines. Another short interlude with a spoken word part in Hungarian, called ‘Genii Locorum’, calms down the pace for a moment. Then ‘The Pulse’ comes along, alternating between speedy parts and highly melodic, calmer parts. ‘Antania’ is the epic one on this album, garnished with blackness and melodies. Great one, again! When ‘Reborn In Flames’ starts in with a mid tempo beginning, I started to miss the speed a little bit, but in the end, SVOID step on the accelerator again, just in time. The next interlude, ‘Chaosathanas’ is followed by ‘Noxulifer’, another fine one with lots of blasting parts that again remind me of the old days of Black Metal. ‘Towards The Horned Father’ again plays with shadow and light, with blasting speed and fine melody, closing the album in a dignified manner. OK, it can not be denied that the work of Jon Nödtveidt has definitely left its traces in the music S created. But this should be seen as a compliment, since SVOID isn’t a mere copy. "To Never Return" shows that SVOID is a band with class and enough creativity to go their own way. And it needs class (and good musicianship as well) to transform inspiration into creativity. In my review of "Ars Kha", I hoped for a killer, and "To Never Return" is the expected killer. The album comes as an elaborate digipak CD, so there is one more reason to check SVOID out now: www.facebook.com/svoid218, www.myspace.com/svoid218 or www.svoid.hu