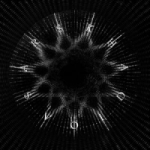 From the depths of hell, in this case Miskolc in Hungary, we have a new band with a mission. SVOID is (up to now) a one-man-project and consists of a person with the cryptic name S. He defines SVOID as Anti-Cosmic Metal, which leaves me thinking of DISSECTION. So I thought, this could be a band to somehow fill the mega-sized footprints Jon Nödtveidt left in 2006 – musically and philosophically. I can’t (and won’t ever) say anything about the latter, but as far as the music is concerned, SVOID are on a good way. There is only this EP with 5 tracks around, which was released in 2011 for promotional use only and is already sold out, according to the information I have. But "Ars Kha" delivers what I think to be the special mark Mr. Nödtveidt left in Black (and even blacker) Metal songs which blend melodic (or classic) Metal elements with black rawness and skills in songwriting. Of course, there is still way to go, but the full-length album, which should be out soon, could be a killer… My favourite moments are the raw outbursts like in the title track (best regards of DARKTHRONE) and ‘Death Underneath’, which reminds me of early IN THE WOODS… (before they became too progressive). If you want to check SVOID out now: www.facebook.com/svoid218 (you can listen to the whole EP here), or: www.svoid.hu