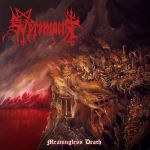 It’s not super often you hear Black Metal bands from Israel, but it’s becoming a little more common these days, which is a good thing. You can only hear songs about snowy woods so much before it’s all sort of the same. SVPREMACIST doesn’t invoke DARKTHRONE or the like in their Black Metal vision. It’s actually their own sound, which is quite refreshing. Lord Teeth’s lead guitars in ‘Witches’, along with Shkedemon’s almost 80s-ish falsetto scream start the album with a bang. His vocals then switch to their norm, sounding like an angry tyrophant ready to behead you at dawn. ‘Godkiller’ opens with a fairly cheesy demonic-sounding voice before the rivetting guitars break through with furious abandon. SVPREMACIST don’t have a new sound necessarily, but definitely aren’t copycats in the genre. ‘Drug Of Choice’ is more of a simple track, where ‘Under Siege’ is chaotic goodness, all over the place. More of the cheesy demon voices at the beginning of ‘Spawn (Of The Infertile)’, but that’s fine I guess. Screaling guitars are followed by a fucking thundering train at speeds of light. This will have fans destroying their surroundings within seconds. ‘No Life Matters’ (because it really doesn’t in the whole scheme of things) is just a rollicking mass of hysteria. ‘Unintelligent Design’ is sort of a mess in production, but still effective in its ferocity. Their first full-length “Meaningless Death” is wrapped up with ’13 Blank Cards’, continuing the same strong path as the rest of the album. It’s good to not only hear new music from countries we don’t normally hear it from, but to also be pounded by a band that’s about business and not just mimicking every band from the early 90s. I have a feeling this band will leave its mark for years to come. For more info, check out www.facebook.com/svpremacist, www.facebook.com/ibdc666