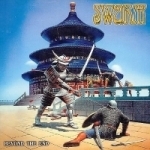 This album musically doesn’t really fit the concept of our magazine, but gets a short mention anyway due to the fact that SWARM consists of no less than three fifths of San Francisco’s legendary Thrashers DEATH ANGEL (vocalist Mark Osegueda, guitarist Rob Cavestany and drummer Andy Galeon), who released three awesome records back in the mid 80s / early 90s! Unfortunately the music that these guys are up to these days has nothing really to do with old school Thrash any longer but is of a highly experimental nature instead. If you ever listened to THE ORGANIZATION (the band they founded after Mark left DEATH ANGEL with Rob taking over the lead vocals) you’ll already get an idea of what to expect. The main difference between THE ORGANIZATION and SWARM is the return of Mark on vocals and an even more experimental writing formular. I might be wrong here, but it seems to me that the guys simply try to combine as many different musical influences as possible into one very unique cocktail – be it 70s sounds, funky elements, Rock, Metal, whatever… luckily they consequently changed the band’s name for this and didn’t release "Beyond The End" under the DEATH ANGEL moniker, which would be an act of blasphemy! So, if you’re open minded enough for something like this or just curious to find out how the guys do sound these days, make sure to give it a try. Everyone else should better check out the upcoming DEATH ANGEL Germany shows in April to get blown away be the musical legacy of Bay Area’s once youngest Thrash inferno!