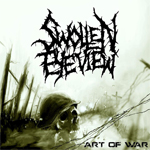 SWOLLEN EYE VIEW, this Finnish Death / Thrash Metal act that has been around since 2008, nearly hits the jackpot on the band’s new, 2nd EP, "Art Of War". If the band’s previous release, "Perpetual Slaughter", leaned more to the old school Death Metal style, on the "Art Of War" EP they sink their claws deeper into the soil of Swedish-tinged blackened and melodic Death / Thrash Metal, without copying any particular band specifically. I just don’t know how much the change of their musical style has to do with the chance of guitarist and founding member Kari Lehtinen, Niko Haapoja replacing him in guitar in summer 2011, but I gotta say SWOLLEN EYE VIEW sounds like a whole different band on the "Art Of War" EP – and the change of their musical style has clearly happened for better. The 2 opening songs off the EP, ‘The Miscreant Ones’ and ‘Path Of Misguidance’, both represent SWOLLEN EYE VIEW at its best – and just the catchiest form basically, and it’s pretty evident even that they have given some thought about the song order on "Art Of War", choosing the most ear-catching numbers to kick off this highly enjoyable EP. The SWOLLEN EYE VIEW camp actually sounds like the kind of act one could have found on the roster of either now defunct Swedish No Fashion or Black Sun Records some 15-20 years ago. They indeed have quite a ‘Swedenized’ sound to them, which I find quite darn appealing to myself at least. Due to sheer quality factor of the songs on "Art Of War", I wouldn’t wonder a bit if some labels laid their eyes on SWOLLEN EYE VIEW soon. They undoubtedly deserve to get their music out on a wider scale, no doubt. More information about SWOLLEN EYE VIEW can be found at: www.facebook.com/swolleneyeview