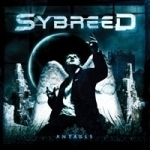 I have a lot of respect for Listenable (Hi Laurent!) as I know the people in there are really supportive to Metal and specially the extreme forms of it. But, slowly a couple of more “commercial” bands started to be released on this label. Well, SYBREED is one of those. Coming from Switzerland, this is actually their second release. Now, to the music. Damn, I mean… imagine a mixture of PANTERA, some strange industrial Metal like PAIN, and more than a touch of bands like SYSTEM OF A DOWN, with mostly angered vocals, some more melodic, and a lot of electronics (keyboards and a lot of “spacey” effects). I’m lost here, really. The sound of this band is really far away from what I usually listen to, and still they sound at times trying to be extreme (there are some blast beats, some thrashy parts, come on, even some Black Metal-alike parts) and yet it all sounds way too modernized. That’s the reason I do not like industrial music and that goes for industrial Metal. Yes, I must tell it is very well played, with a perfect production, but it all sounds the damn same, and in this case, the industrialized sound takes away all life. I mean, this can be even like a dance / trance thing. Even if I dislike the overall result, there are some catchy riffs here and there, so I guess those who are into modern industrial extreme Metal, will dig this a lot. Those keyboards still haunt me… like if I was seeing the “Cosmos” series with the late Carl Sagan… Metal played by alien robots or something. But very radio friendly and probably will be a good seller… www.listenable.net