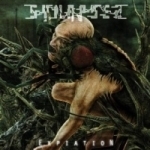 Italy was never known as a Death Metal El Dorado. In fact, I can hardly remember any notable extreme bands from Italy, except for Hardcore heroes like NEGAZIONE or RAW POWER and the extremely fiddly sounding SADIST (how about NECRODEATH and BULLDOZER? – Frank). In their tradition, SYNAPSES rose from the ashes of a band called UNDERHATE in 2008. And this four-piece from Brescia goes even further than SADIST… "Expiation", being their first full length after a self-released EP in 2010, combines brutal Death Metal with a technical sound that reminds me more than once of MESHUGGAH. Both riffing and guitar sound makes me think of "Destroy, Erase, Improve" nearly the whole 40 minutes of this album. At least when they are audible… Because the biggest problem of "Expiation" can be found in the mixing. The drums are so dominant and even unnatural sounding that it is sometimes very hard to hear the other instruments. Snare kills riff, so to say. And that’s very sad, because it kills most of the fascination of this album. Imagine the frantic, brutalizing opener ‘The Iron Stream’ with a decent mix and it would kill!!! Even though, I picked out my definite favourite of this album: ‘Wearing Your Body’, a grinder with a lot midtempo-parts and a great title as well… I hope their next album will have a better mix and I’m sure they will go far in the extreme Metal scene. If you’re interested in checking out a very promising band now, check their myspace: www.myspace.com/synapsesnet, or the labelsite: www.deepsend.com