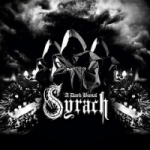 Again Napalm Records and again Doom Metal but this time with far stronger roots to BLACK SABBATH and the cradle of Heavy / Doom Metal. The Norwegian SYRACH  are releasing their third full release with "A Dark Burial", but the band history is reaching back to 1993 (the band released only a handful of underground demos between 1996 and 2007) and my expectations had been – due to very weak former release – everything else than sky-high. The album starts with ‘Curse The Souls’ a 10 minute monster which combines on one hand some minor Black Metal influences – just listen to typical "De Mysteriis Dom Sathanas" MAYHEM riff – with the slow Doom guitar universe. In some way the band is heading nearly into the same direction as their brother in arms SAGH and this album is definitely a release for all the Metalheads which had grown up in the purity of the 80s instead of the last decade of Black Metal terror. Even if my age makes me a child of Black Metal terror of the 90s this release is a very solid album, especially due to the fact that SYRACH are fully capable of giving their music enough room to fully flourish without the impression that the band just follows any kind of trend. "A Dark Burial" is a very authentic album especially for the over the years so heavily criticised Napalm Records standards. www.napalmrecords.com, www.myspace.com/syrach