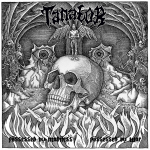 This is a re-release in CD format of TANATOR’s 2014 cassette-album, the only recording so far by these Russian Thrashers. ‘Siberian Hell’ begins slow but soon mayhem breaks loose with an aggressive brand of blackened Thrash Metal. The sound and production are just a bit primitive and muffled, but as is often the case I find it adds in atmosphere to this kind of dirty Thrash. It’s better than sounding like so many plastic cubase productions. You can hear some amateurishness that reinforces the impression of a band of young dudes with their metallic energy bursting at the seams, aiming for the throat with a no frills attitude. Man, when the guitar player plays solos, you only have the bass and drums backing up. How more legitimate can you be! Listen to great tracks like ‘Fear Of Death’ or ‘Сучья работа’ (‘Bitch’s Job’, the only one sung in Russian), that seem to have been abducted from the eighties. It all sounds organic, with real drums, heavy distorted guitars, and pristine rage. Despite a couple of old school American touches, mainly in songs like ‘Toxic Rain’, what most often comes to my mind is the unpolished German assault of KREATOR’s "Endless Pain" or POISON’s demos. When ‘City Of High Roofs’ begins, the evocation of SODOM’s ‘Witching Metal’ is totally unavoidable. ‘Holidays In The Church’ sets a very black Rock’n’Roll mood (in the way IMPALED NAZARENE used to do), before speeding up into a kind of Crossover. So you find a lot of the old influences of the golden age of yore. The bottom line is: yes, I loved this! Oh to be young again! Salutations to these keepers of the old school sacred sound! More info about the band at www.facebook.com/pages/tanator/1503836223201716, http://tanator.bandcamp.com, http://grotesquesounds.weebly.com, http://satanath.com/distro