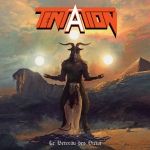 Does anyone remember the good old days of yore, when France was a kind of paradise for Heavy Metal? It was about 1983, 1984 when there were bands like SORTILÈGE, H-BOMB, BLASPHEME and DEMON EYES that released EPs and albums that were among the best that you could hear back then. Powerful Metal with good melodies, fine song writing and great singers who sung in their native language – this mix still knows to enthral me, even after nearly 40 years. And now four young Metal enthusiasts are trying to revive this glory. They chose the name TENATION and have their first full length album “Le Berceau Des Dieux” out after a split album and two EPs. Did they succeed? Hell yes, they did! It took about ten seconds of the opening ‘L’Exode’ until my fist raised in the air, my fingers made the horns and my head started to bang. This song brings back the spirit of the old days, transferred into the 2020s without sounding outdated. And when I listened to the following ‘Le Couvent’ for the first time, I had my left foot on my chair (as an improvised monitor box) and played air guitars like it was 1985 again. The third track ‘La Chute Des Titans’ finally convinced me that this album is nothing but absolutely fantastic. Just listen to the short, but powerful chorus and the burning lead guitars! ‘Le Taureau D’Airain’ proves that TENTATION are also damn powerful when they cut down the speed. ‘Conquérants’ is another fantastic headbanger with a surprisingly melodic chorus and an irresistible drive. With ‘Baldr’, TENTATION show that they also have balladic sounds down cold. The great ‘Blanche’ is another proof that Metal still reigns supreme. And in the end, TENTATION praise the glory of ‘Heavy Metal’ with a wink. Yet the fantastic songs and the fresh and absolutely stunning sound of “Le Berceau Des Dieux” are not the only things to be praised as the album is topped off with a great and nearly perfect production that just screams: vinyl! Without any doubt, “Le Berceau Des Dieux” is the best real Heavy Metal record of this whole fucking millennium! Hail the French hordes of Metal at www.facebook.com/tentationfrance or www.facebook.com/gatesofhellrecords