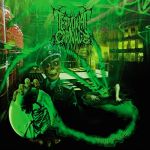 TERMINAL CARNAGE is a Death Metal duo based out of Germany that has put out their first release, the full length “The Sickening Rebirth” on Great Dane Records. At face value “The Sickening Rebirth” is actually quite sick! The band churns out disgusting old school Death Metal. There are no extras anywhere on the album, the riffs are slow and precise, they’re heavy without being unnecessarily slow or downtuned. It’s a good tone on the whole. The drumming is well done. There are no displays of superhuman capabilities anywhere on the album. TERMINAL CARNAGE have clearly set out to play good old fashioned Death Metal and they do it with ease. There are good melodic surprises thrown in from time to time like the beautiful solo on track #4 ‘Dead Mass (The Doom Of Mankind)’. The vocals are appropriate, the atmosphere is the right kind of dense. If you’re a fan of OBITUARY (well, who isn’t?) you should definitely check this album out. The album is just 31 minutes long and packs in enough punch to keep you interested. TERMINAL CARNAGE manage to pay a good homage to the classic sounds with this album while managing to bring something of their own to the table. The simplicity in their songwriting coupled by a terrific execution makes this an album worth your time. Another quick reference is the intro to track #7 ‘Least Evil’ which summons the spirit of IMMOLATION and sounds just fantastic! The point isn’t if this is a perfect album or if it’s a contender for the album of the year. The point is has TERMINAL CARNAGE managed to put out a fine slab of Metal for the fans? Well, yes they have! That’s pretty much it. If you have some time, give this album a spin. They should definitely play live as soon as possible, preferably in the local pubs where I guess they’ll sound majestic. For more information please visit www.facebook.com/terminal-carnage-109571960777270 or www.facebook.com/greatdanerecords