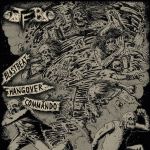 TFB (stands for Task Force Beer) is a Death / Grind five piece from Germany, that came together in 2015. Composed of members who are featured in regional (Rhineland-Palatinate) bands of similar styles, they started TFB as a three piece project in November 2015, and at the end of 2016 had become a six troop force (with members of BOILER, KATATONIE, MASSACRE THE WASTELAND and WORLD ESCAPE). They released their debut album “Meaning Of Life” in 2017 – interestingly it reminds of the classic “The Meaning of Life”, unearthed in the heydays of 1990 by their forefathers TANKARD; the German institute of alcoholism, society, life, anti-fascism, anti-racism and humour. Was it unconsciously or deliberately titled, is my query to the guys, if they are ever reading this, but no doubt, the Teutonic spirit obviously transmitted to the Germans, to create their own take on forging Deathgrind and Grindcore together and obviously, with shitloads of beer (wonder, how many of vintage and cheesy kinds!!), to convey energy, power, consistency and, above all, life humour. Like a deadly first strike, “The Meaning Of Life” by TFB was released independently (CD) and later by Narcoleptica Productions (sassette) and its 15 tracks, below 30 min was surely simple and let the times fly and bursts with grinding force. So, it was enthralling to find that hilarious forces are back to feed the thirsty kinds with their second full length with 19 new songs, and less than 35 minutes of whirlwind, aptly titled “Blastbeat Hangover Commando”, which is now released by F.D.A. Records (CD and digital download), prestigious home of Punk, Hardcore, Grindcore and Death Metal. By not being another hobbling copycats, TFB seems like storming out of their potholes after three years of hangover and bring themselves back to their own self with melody and groovy swing, where the pace of songs very often deviate from high-speed cuts, to a medium-temperament mood, and each transitions has its distinct taste, like varieties of finest German beer! And, no doubt, the guys give us a treat with their second ejection. Grindcore is in the air, and after the short intro, nineteen attacks will come one by one, which are sometimes catchy, and occasionally have been given a slight Hardcore attitude, typical of the genre. Carrying the tradition, “Blastbeat Hangover Commando” is kept tight, with defying retro attitude (just check two official videos released by F.D.A. Records (‘BxHxC’ and ‘Cancerhorse’), and subject matters important to explore with effortless playing in all four department’s, spearheaded by an energetic production, recorded by the band itself (mixed and mastered at Ear We Go Studio and Blackout Studio). Befittingly, track titles like ‘Iron Ingo’ (Iron Prophets!!), ‘Rasva Apina’ (Fat Monkey), ‘Apina Nuijan Kanssa’ (Monkey With Hammer), ‘I Don’t Care’, ‘Bright Side’, ‘Asshole Next Door’, ‘Cancer Horse’, ‘Dancing King’, ‘Hausmeister’s Schlund’ (Master’s throat), ‘Broken Dreams’, ‘Beer Head’ and ‘Barfight Blue’, tailored with intro and outro; fantastically established the witty and short, energetic almost beyond reason, and downright comical and hysterical style of playing and the cover artwork (depicted inexplicable deeds by all doomed souls of TFB!!) by Huere Artworks, will tempt you to explore many times. Although, I wished to have the chance to read the lyrics (possibly über hilarious with myriad tales!!), but enough pleased to demand them for releasing many releases in the future, and lure many more like-minded maniacs in their zone. Be in touch with them at www.facebook.com/taskforcebeer, and for ordering, visit their label page at www.fda-records.com