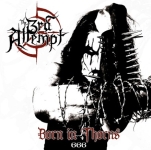 In 2014 Tchort and Blood Pervertor left CARPATHIAN FOREST to concentrate on their own new entity THE 3RD ATTEMPT, and they are now ready with their first full length abomination. Together with the already mentioned 2, we have Ødemark and Tybalt, so quite a seasoned assembly Dark Essence Records has unleased upon us. I stumbled across the band, when the first sound from them, the track ‘The Art Of Domination’ became available on the internet, and I was more or less, instantly hooked on their fierce and aggressive Black-Thrash Metal attack, and now I have had the album in heavy rotation for a couple of weeks, and that has been quite unpleasant! As, who likes their Black Metal pleasant? The base is in a heavy and actually quite catchy Black Thrashing attack, as the guitar riffs are so damn memorable and hooking, just give ‘Beast Within’ a listen, and try to make yourself stop rocking! The music differs between the already mentioned Thrashing Black attack, songs and parts that could have been written and recorded, for that matter, back when Tchort or Blood Pervertor were a part of CARPATHIAN FOREST, as it hits the style and feel in that period of the band, nothing bad about that all. Then we have the bit more progressive Black Metal parts, sometimes even nearing Avantgarde Black Metal (damn, an expression I sworn I’d never use again, after all the fuzzy releases in that genre back in the days), where the band plays a lot with paces, sudden shifts and different vocals. In its whole, it actually works out quite well, and gives us a strong album, with some really good songs. It all ends with the industrial droning ‘Anti Self’, which also has a couple of breaks, with some good riffing and drumming and a nice twist towards the end. So a good whirlwind around old Thrashing and some more atmospheric and dark pieces, uptempo beating and more blazingly cold Black Metal. Though mostly Black Thrashing madness, great riffing, sick vocals and an overall feel of ugh! A nice recollection and assembly of what the band members have been doing in the past, and a glimpse of what the future might bring, I’m a fan! Skjend hans lik at: www.facebook.com/the3rdattemptofficial, www.darkessencerecords.no