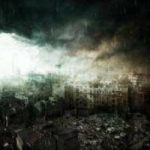 This band from Monterrey, Mexico is around for several years now. In 2006, they started as an OPETH cover band under the more simple name ADVENT. Not the typical choice to start a musical career, I think, but a very brave one. The five-piece released an EP before they changed their name in 2012 and became THE ADVENT EQUATION. “Limitless Life Reflections” now is the debut album under their new moniker, a self-financed album with 8 songs in more than one hour. Long songs might be a hint that their past as a cover band of a well known progressive Metal band has influenced their style at least a little bit. It’s a good bit, indeed. You can surely hear the impact of OPETH all over this album, but THE ADVENT EQUATION take their inspiration also from Progressive Metal and Prog Rock in general. You’ll find DREAM THEATEResque moments here as well as some more glimpses of 1970s Art Rock bands like GENESIS and KING CRIMSON. But it is hard to deny that OPETH in their middle phase (from “Still Life” to their landmark “Watershed”) has the major influence on the sound presented here. And this doesn’t necessarily mean that THE ADVENT EQUATION are mere copycats. Thanks to the aforementioned other influences, the Mexican quintet already found its own personal niche in the more and more populated Prog universe. A song like ‘Purification Lapse’ is hard to imagine to be on an OPETH album, not for those 1970s moments but for the strange, rather atonal breaks. Another real highlight is ‘Visions Of Pain’, a song poaching in the Elysian fields of Art Rock in a way that OPETH nowadays could be proud of without forgetting the Death Metal roots. Or check out ‘Hopeless’: MESHUGGAH style weirdness followed by soundscapes like DREAM THEATER couldn’t do better within the blink of an eye, not to forget some quite easy listening piano parts with classical influences. So, if you think that OPETH submerged too much into the realms of Art Rock, you might give THE ADVENT EQUATION a chance, even though it takes more than one run-through of the album to capture it in depth. It is worth the time! Especially if you consider that “Limitless Life Reflections” is their debut album. Looks like there is something great to come from these guys from Monterrey in the future. There is only one question left: what has all this to do with Death Metal? Not much, really, except for some of the vocals and some of the riffs. File this album under: Progressive Metal. And if you are into this stuff, you should check out: www.facebook.com/theadventequation, where you can lend them your ear.