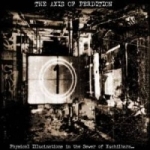 THE AXIS OF PERDITION
Physical Illucinations In The Sewer Of Xulchibara
(Code666)
30:07min

“And then again I saw, and behold” a new seal of the UKs purest avantgardist duo. After their essential previous stereo drawings namely “The Ichneumond Method – And Less Welcome Techniques” here they come again with the violent stinch of twitching terror wrapped in half an hour of a nightmare suspension. Cause here is their real nightmare suspension… from the very beginning the sound inexpressibly enters the ear to smelt down unto the mind, then to the unconscious and thus the nightmare to begins… the ‘machine’ aspires every inch of reality, twisting shades start to appear, the target is approaching… intensity, everything is about intensity in this digital manipulation, everything… until the illucination of a waking interferates from the other side: “I have come to witness the beginning (…)”; be sure you’re not awake, you’re just about to touch the first depth (‘Where The World Becomes Flesh’) entwined in an impulsive torment of acrid guitars and pounding chirurgical beats, they sound here as the unatural progression from the first act, sometimes a bit more Hardcore-ish, sometimes a bit more Death-ish, sometimes a bit more Black-ish… nevermind, the definition is avoidable. “Did you do all this?” – oscillations locked in the red, overdriving the loudness of the sub frequencies, ‘The Pendulum Prey – Reciprocating Horror’ is to my point the track which definitely includes The Axis Of Perdition into the unique-level-reachers’ ranks showing them with an outstanding sense of rhythm and tunes that contemplates with power what is given with a far-distance clear voice; they created some space in their music compared to the (relatively) massive “Ichneumond Method” album. This, is their key to go beyond everything that stands. A vast concert of industrial noises and a sonar disturbance (‘Reopening Wounds From The Transition Hospital’) brings you to another depth of the created paradigma (‘Heaving Salvation In The Paradise Of Rust’), a visionnary entity of the unknown abyss which is yet to come, to descend into, but seems infinite, desperately black; and as oceans’ depths drive a soul to get deeper, you’re bound to inexorabily re-begin what you’ve always done, but what you always forget – clinging against the stream. Deconstructions, un-harmonic arpegios, a contemplative voice, and a neverending oppression progressively guides to revelations, to release the stone you were hanging against the stream and get carried by it… literally out-standing… to be continued… (hey Krig, what kind of drugs did you take before writing this, hahaha – Frank). www.code666.net, www.clix.to/axis.