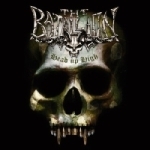 The new household name on the dark scene of Norwegian thrashing madness is THE BATALLION. A band consisting of members that have roamed and roam bands as OLD FUNERAL, GRIMFIST, DEATHCON, BORKNAGAR, TAAKE, CULT OF CATHARSIS and AMOK. How does such a bunch end up playing fastpaced dark Thrash Metal with a good deal of Speed Metal mixed into it? Well, a good question, though when looking at bands as DESEKRATOR that featured vocalist and guitarist Tore Bratseth – a band that was merely a fun-project – even though I still enjoy their one album "Metal For Demons" when I once in a while dust it off – with the base in speedy Thrash Metal – and Tore’s wellknown passion for MOTÖRHEAD. Ole Walaunet’s thrashing riffing in GRIMFIST, Kai K. Lie’s heavy rocking in ST. SATAN and with the bands Morden has drummed in, he can handle most – and things start to add up. We are getting 11 cuts of quite catchy thrashing Metal – the base and approach is quite old school, though the packing is modern. Well, it can be discussed if the, a tad, muddy and noisy production is modern or not – though when a guitar lead or solo cuts clearly through the wall of crushing riffing and rhythm – it stands out as clear as the full moon in a frostbitten night – so they knew what they were heading for and wanted. And when we are at the guitars, damn, great catchy riffs and ripping leads and solos – very enjoyable – and the IRON MAIDEN homage in ‘Undertakers And Neckbreakers’ is a grand gesture. Compositionwise we are getting a fullblown attack on all senses and the neck, damn the music calls for some serious headbanging – and even though the music might seem simple at first – it has a good deal of layers, and doesn’t become boring. Great guitars, good rhythm patterns, crushing parts and a speedy catching massacre beyond the year 2010 – the vocals on top of it all do also do good – a well performed scream, deeply rooted yet highpitched with emotion and frustration, a really strong vocal performance. THE BATALLION’s first full length "Stronghold Of Men" was quite enjoyable and this album is a natural predecessor to it. More worked through and with stronger compositions, more secure musical performances, more power and energy – a more lasting album – this Hardrocker will last the test of time and if something can be old school and modern at the same time, then "Head Up High" will take the price! Perhaps some of the songs reminds a bit too much of each other in the build up and performance – though as long as they are highly energetic and ripping, that doesn’t bother me much. www.myspace.com/thebatallion666, www.darkessencerecords.no