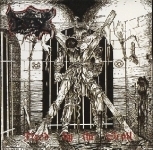 THE BEAST
Fixed By The Devil
(Painkiller Records)
15:43min

The "warning" slogan on the backside of this promo CD ("Underground sound for underground maniacs only!") already makes perfectly clear that you shouldn’t expect a proper production here… But the sound on "Fixed By The Devil" is even worse than I expected it to be and in my opinion by no means justifies a CD release! But maybe I’m not "underground" enough to really understand the real propose of it… (Most of) The material on offer here was probably simply recorded at a rehearsal place, the drums in the titletrack furthermore sound rather unnatural to me and considering the fact that there’s an intro, an outro and a VON covertune (‘Devil Pig’) results in only four "real" own songs… A fact, which not necessarily makes this mini CD more attractive (if you have to spend your hard earned money on it). But anyway, there’s most certainly a lot of die hards out there who will still find positive (cult?) aspects about THE BEAST, especially because this is a sideproject by ENTHRONED’s Nornagest, which musically draws inspiration from such underground "legends" as GOATPENIS, NAKED WHIPPER, BEHERIT, ARCHGOAT or SARCOFAGO (and the coverart also got supplied by Chris Moyen)… And hey – the overall dark atmosphere that especially comes across very well in the great instrumental (almost soundtrack like) CD closing track (which isn’t mentioned on the sleeve) even did impress me! For further info, go to: www.painkiller-records.com