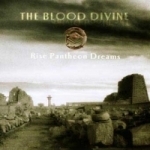 Well, honestly spoken, I don’t know what Peaceville intents to achieve with this kind of release. THE BLOOD DIVINE, the band of ex-ANATHEMA singer Darren White, created two good Doom / Death albums that musically are not far away from ANATHEMA’s “Silent Enigma”, “Eternity” phase, but with some own ideas, like the use of organs, electronic effects, whatever. No revolutionary band though, but not just a bad copy as well, indeed songs like ‘Wilderness’ or ‘The Passion Reigns’ are great atmospheric pieces of musical art. Now Peaceville puts out a kind of “best of”, that features five rare or even previously unreleased songs and eight tracks from the two albums “Awaken”(’96) and “Mystica”(’97). To me this collection smells like rip off!!! Especially to true fans of THE BLOOD DIVINE “Rise Pantheon Dreams” should be a very annoying release – it offers only enough rare stuff for a MCD and not a whole album. Maybe new listeners can be attracted by this CD, but I bet most of them prefer the original albums. In my opinion this is one of those fucking money-making-affairs, it is worthless and I don’t like to advise it by telling you what stuff you will find on it in detail.