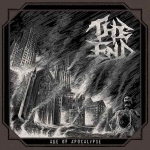 I was worried that those old school Death Metal supergroups were no more happening, as the last 6 years were swamped with new bands formed by Death Metal “legends” and newcomers, mixing their skills and knowledge of the genre, trying to create something new (yet old). The constant re-issuing of out of print / hard to find records helped to fuel up the flame of bands that we all thought they were not going to play or record anything together anymore, and now those classic bands are back on the road and in studios playing again and trying to capture the magic and what was left behind during the glory days. F.D.A. Records announced the imminent release of the supergroup THE END, a new group with the (only) 2 current members of MASSACRE and 1 member of the late EMBODIMENT (USA). This project is (obviously) trying to capture the essence of the late 80s US Death Metal sound. This is their first EP entitled “Age Of Apocalypse”, and let me tell you this is some good US Death Metal. The MASSACRE reference is a must; this EP sounds like a mix of the early demos all the way to “From Beyond” mixed with some late MASTER old / modern production and songwriting approach. Basically if you don’t like what MASTER and MASSACRE put out in the last 10 years, but you have respect for their ideas and sound, and want to imagine what would they end up sounding like if they have a band put together, this is as close as you will get to that. Less than 13 minutes might not be enough for some, but you get the whole idea and the vision of what might come with their first full length album. I mean, this is Floridian Death Metal as it’s supposed to be played. The artwork is magnificent. So if you feel there’s never enough old / new Death Metal experimentation out there, go pay a listen to THE END and buy the EP at the following links: www.facebook.com/theendflorida, www.fda-records.com