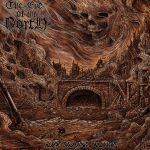 “Black Thrashing Onslaught” is the first full length by the one man project THE EYE OF THE NORTH from Bergen, Norway. The album kick starts with ‘Winds Of Death’ and gets to business right away. The vocals are just right for the medium, the guitars (although buried behind the drumming) display a good modern approach while not losing the roots of the genre. There are some obvious inferences from “Black Thrash Attack”, however THE EYE OF THE NORTH isn’t as chaotic, it’s well put together and I’m quite enjoying it. My only point with the songwriting is, the drumming could be more varied. It does the job well, but the maturity of the atmosphere and the riffs overall does not percolate to the drumming. The riffs in themselves are sufficient and don’t meander, there are no complaints otherwise. The music on the whole is engaging, the atmosphere the band creates is that of a menacing darkness, slowly pushing you to the edge. Track # 6 ‘Black Thrashing Onslaught’ is a perfect example, a well balanced thrashing approach with a supporting atmosphere that showcases the band at its best. The pick of the album for me however is track # 7 ‘Into Oblivion’! The track opens with a traditional Heavy Metal riff and immediately jumps into the black cesspool of atmosphere, aggression and angst. Absolutely stellar! I suppose fans of EMPEROR will utterly enjoy the second half of the album a lot more. The vicious riffs and the synth laden atmosphere come to life here like never before! On the whole, the music is a well contained soundtrack to the marching armies. If you’re on the fence, you definitely need to listen to this well written and engaging album. Recommended. https://theeyeofthenorth.bandcamp.com, www.facebook.com/ibdc666