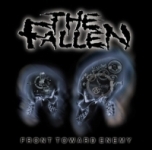 To say that I have my doubts regarding the future of THE FALLEN would be a gross understatement. I wonder how this band managed to get a deal with Metal Blade Records in the first place, maybe I should dust off my guitar and try my luck after all? Because let’s face it, “Front Toward Enemy” is a catastrophic release. First, I have to tell you that the vocals courtesy of guitarist Mike Granat are unbearable, imagine a Hardcore vocalist with the flu and I guess you will get a fair idea of what I mean. Add to this aggressive backing vocals a la SEPULTURA “Chaos A.D.” just to persuade us we listen to tough guys with an attitude, stop-and-go riffing only based on rhythms and I think the picture becomes more precise, doesn’t it? It is to a point the band and the label show themselves confused about how describe the music: in the band bio, I read at the same time that THE FALLEN play “Power / Death / Thrash”, that they are an uncompromising Heavy Metal band but retailers have to file the album under the “Death Core” tag. Maybe it is a little too much, because it is well known you can’t ride more than a horse at a time. And the music reflects this state of confusion. It is impossible to distinguish one song from the others, except for no less than two acoustic instrumentals reaching the summit of a mountain of ridicule. Bill Metoyer handles the production duties here, let’s say he delivers a honest salary-man job just to spare him hardest comments. The four musicians of THE FALLEN are competent enough, with a special mention going for drummer Max Wolff, an extremely skilled guy obviously, but the songwriting is inexistent to the point it is extremely difficult to listen to the album in its entirety, as the songs come out totally disjointed and going nowhere. Be not THE FALLEN seriously reconsider their musical approach, tighten their writing and above all hire a proper singer, they will certainly fall for good into the abyss of oblivion. Meanwhile, I advise you to stay away from “Front Toward Enemy” unless you have some money to dilapidate, but that is your problem really!