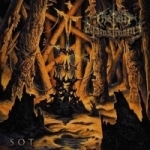 THE FEW AGAINST MANY
Sot
(Pulverised Records)
36:04min

The Swedish Metal scene will hopefully never lose the ability to offer fresh and hungry newcomers year after year. This time only the band name justifies the terminus new because all members of THE FEW AGAINST MANY are well known musicians and their former bands SCAR SYMMETRY, TORCHBEARER or SATARIEL have for sure influenced the Swedish Metal scene to a certain degree over the years. But the official THE FEW AGAINST MANY debut “Sot” (Swedish word for soot) is not a typical example for the Swedish Death Metal sound mainly due to the fact that their style has a very modern touch with a lot of drive and bombast. But the exact definition of their influences isn’t so extremely essential, far more important is the fact that this album offers 36 minutes of ass kicking Metal with eight headbanging monsters. Especially the longer tracks like ‘Bränd Mark’ or the killer title track ‘Sot’ are perfect examples for the fusion of high speed Death Metal with certain effects to intensively the atmosphere. Swedish Death Metal has many dark and ugly faces and the world modern should not chase away any real fan of this style – he/she would miss a really good debut. www.myspace.com/thefewagainstmany, www.pulverised.net.