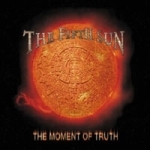 THE FIFTH SUN
The Moment Of Truth
(self-financed)
38:14min

Whatever I write about this album won’t really do it any justice, because bands of this genre already started to bore me to death several years ago. So, all I can tell you here is that THE FIFTH SUN is a melodic Death Metal act from Northern Minnesota, USA which certainly knows to handle their instruments rather well. As a result all of the nine featured tracks on “The Moment Of Truth” are very well executed and arranged compositions. I don’t really share the opinions of the quoted fellow writers though, who attested them to “become the best of the best on the American landscape” or that they are “easily better” and “not band number 1000 in a line of endless melodic Death Metal bands…” One of them even compared them to late DEATH (which is nothing but ridiculous)! Despite their obvious musical skills, they still have a long way to go in order to make a lasting impact on the scene. Everything still sounds way too pretentious and wellknown yet and the fact that they were the first band from overseas to record at Swedens overused Studio Fredman won’t necessarily make them more unique either (it’s actually more the opposite around if you ask me). But there’s a little light at the end of the tunnel as the aggressive and pretty raw vocals of guitar player Bryan Horn luckily differ quite a bit from the typical Gothenburg type screaming and could be seen as the band’s first step in a better, more unique direction already. Contact and further info: bryan_horn@hotmail.com, contact@thefifthsun.com, www.thefifthsun.com