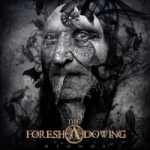 With the release of the second THE FORESHADOWING album our dear friends of Cyclone Empire conquer a completely new territory far away from their Death Metal motherland. This Italian act has been founded in 2005 and some of the band members are also involved in such ultra alternative acts like KLIMT 1918. Think that a lot of colleagues will advise a strong Gothic touch – which is an undeniable fact – but THE FORESHADOWING is offering more otherwise this review would never find its way to the unholy VFTD archives. Can’t say anything about their debut “Days Of Nothing”, released in 2007 via Candlelight Records, but the second output is a release with various layers. Maybe this comparism is not complete accurate but the band is offering a release in the tradition of such Italian acts like RAS ALGETHI with an extreme focus on a strong avantgarde touch. Especially the hypnotic parts with a lot a keyboard ‘assistance’ (just listen to the really great ‘Russians’ cover version) are supporting this theory. So don’t expect hammer & axe on “Oionos”, the darkness is floating in small portions throughout the one hour playing time. For sure an interesting release far away from the normal ‘softy’ non Metal music and only time can tell if Cyclone Empire can extend their company profile, THE FORESHADOWING have for sure delivered strong material to support this masterplan. More info at: www.theforeshadowing.com, www.cyclone-empire.com