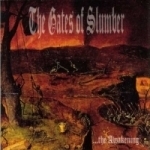 THE GATES OF SLUMBER
...The Awakening
(Abyss Records)
53:30min

So, Abyss Records reissued Indianapolis Doom Metal veterans THE GATES OF SLUMBER’s debut album “…The Awakening”, releasing it in a CD-format again in November 2012 with all new layout, cover artwork by Ken Kelly, a bonus track (‘The Cloaked Figure’ taken from the band’s 3rd 2004 3-track demo) available on CD for the first time, and even a new track listing. It’s really good to see this record reissued, since the original Belgian label Final Chapter Records that put it out back in 2004 already, doesn’t even exist anymore. Also, finding this record as original, is pretty tough nowadays, too. THE GATES OF SLUMBER’s, may I say, ‘Sabbathian’ / Saint Vitus – que styled retro and / or trad Doom Metal really doesn’t need much of introduction. It’s pretty evident that Tony Iommi’s spectacularly sharp songwriting pencil has left deep marks in the hearts of band members when spinning “…The Awakening”, time and time again. Especially BLACK SABBATH’s 1970-75 era has had a strong impact on THE GATES OF SLUMBER’s trad Doom Metal approach on their debut, and I am positive there’s even no reason to start argue about that fact with the band members at all, as they undoubtedly do admit it themselves how much BLACK SABBATH have worked as some sort of an exemplary road signal for them but also LA’s SAINT VITUS as well. THE GATES OF SLUMBER have managed to capture that true spirit and vibe of ’70s heavier music into their debut opus, sounding amazingly warm, organic, very nostalgic and giving us so much of joy by doing so. Also, I was just wondering how many times vocalist and guitarist Karl Simon has heard from people that at times he tends to sound very much like Ozzy – either intentionally or just by accident, who really knows. For what this album is all about, it’s about re-awakening the old spirit of ’70s heavier side of music back to life again. Now all hippies unite to rejoice for this. We have a quite helluva feast in here. Band website: www.slumberingsouls.com, label: www.officialabyssrecords.com