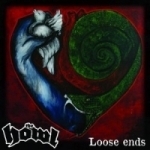 Tornio-based trio THE HOWL is the northernmost Metal / Rock band I can think of at the moment. THE HOWL’s 11-track debut album, titled “Skins Of Our Back”, that was released in 2010, left a pretty positive impression on me for its sort of FURBOWL-ish approach; those heavy, rot ‘n’ roll vibes surrounding me from every direction – and the band’s follow-up album, “Loose Ends”, basically continues from the same, deep footprints where they left off on the relatively enjoyable “Skins…” record. However, in which the Swedish FURBOWL tended to count more on utter heaviness, this Finnish trio wants to rock our hearts out a bit more – keeping it simple, somewhat teeny-weeny more fast tempo-ish and adopting a similar musical approach for themselves that once made XYSMA’s “First & Magical” and DISGRACE’s “Superhuman Dome” albums such welcomed and pleasing journeys for many of us back in the day. “Loose Ends” has the very same vibe and spirit sucked in, as those two aforementioned releases – and THE HOWL’s unrelenting and straightforward rockin’ Metal becomes nearly impossible to resist. This Finnish trio has truly found a relatively unique musical approach for themselves, to nail our ears to their stuff for a bit longer than just for a couple of passing moments, I think. Somehow they have managed to keep this already long defunct ‘Finnish Death-Rock’ thing fresh and vivid sounding, adding some of their own tricky techniques and catchy hooks into the soundscape – to avoid completely the most obvious traps for just being another lousy clone act of this or that band. For example a song called ‘End Of Reign’ truly tends to differ from the pack what it’s all about musically, having even a couple of guitar riffs that could be borrowed straight from the famous SLAYER’s shredding duo Hammeman / King. This 13-song effort indeed has quite a lot of powerful charm to it, which undoubtedly attracts many of our ears. If you don’t believe my shameless words about them, then you may want to check them out by yourself? Easy. Just go to: www.the-howl.net or www.inverse.fi