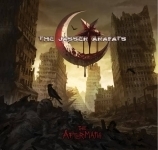 Finland’s Death / Thrash Metal troops THE JASSER ARAFATS (what a hilarious band name, by the way) managed to make a decent impression on me with their 2010 debut album titled "Condemnation", showcasing some very violent sounding mixture of both modern Death and Thrash Metal, even if lacking in the originality’s department slightly though. Since then 3 years have been passing by almost just like that. The silence was broken a little while ago when a new 4-track EP, "Aftermath", was catapulted into the air by the band’s current label, Violent Journey Records. Since the band’s "Condemnation" album, both bassist and 2nd guitarist were replaced in the band. The new weapons in the arsenal of THE JASSER ARAFATS, J. Liukkonen (on guitar) and S. Hautamäki (on bass), have adopted their roles well in the band, providing some nicely targeted background barrage in their troops. As for the songs on the EP, THE JASSER ARAFATS are undoubtedly out there to kill; they come on our necks with all the guns blazing, trusting the power and aggression of the band’s ever-streaming lessons in musical violence, in which sharp ears can hear traces from SLAYER’s direction when strictly speaking of the guitar work alone. The band’s new stuff is also more diverse and a bit better executed this time, compared to their "Condemnation" album. The vocals of Jari Kurki aren’t really your typical growls, as Jari tasteful deep grunts are far better delivered than your average Death Metal growler’s, I think. THE JASSER AFARATS basically tread a fine path between Death and Thrash Metal, not really bringing anything new on the table but simply strengthening their own position by this EP release in the vast battlefields of worldwide Metal scene. Some good, violent soudning shit here. More at: www.facebook.com/thejasserarafats, label: www.violentjourneyrecords.com