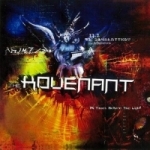 THE KOVENANT
In Times Before The Light
(Hammerheart Records)
57:01min

When this album originally came out on Mordgrimm Records back in 1995 it still featured the band’s old name / logo COVENANT and a completely different packaging. Mainman Nagash was quickly recruited by DIMMU BORGIR shortly after but at the time this was basically just one of his countless side-projects anyway (among CARPE TENEBRUM, TROLL etc.). But in the years to come COVENANT suprisingly matured more and more into a ‘real’ band and even released their next album on Nuclear Blast Records (“Nexus Polaris”). Shortly after though, they had to change their name into THE KOVENANT and went on to explore slightly different musical boundaries. That evolution also kind of reflects in this “re-issue” which basically hasn’t much to do anymore with the original version. Ok, you’ll notice the completely different visual side of the record straight away and there’s also talk of a remix… But unlike with many other releases that are said to be remixed (and you usually don’t hear shit) this is indeed quite a drastic difference. The “remix” almost turned this into a completely new record! The modern overtones that became quite a big trademark for THE KOVENANT (and were still missing in their style back in the early days) have also found their way into the material here now as well. Which means that traditional Black Metal fans most certainly won’t get a kick out of this any longer and probably should continue their search for the original (COVENANT) version. All those of you who are open minded enough though and tend to like most of the experimental happenings within the current extreme underground, should give this a (second?!) try because the result is far more promising than I expected it to be. While the original record was basically just a second rate DIMMU BORGIR, this became quite an exciting, refreshed offering that could easily compete with a bunch of the current releases on the market. Very cool.