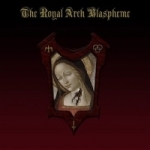 One might feel tempted to think THE ROYAL ARCH BLASPHEME is the first American Black Metal band to borrow directly from PROFANATICA in as pure a way as can be obtained; for they do sound eerily like Paul Ledney’s legendary band. Tempting; but THE ROYAL ARCH BLASPHEME is a part of the PROFANATICA legend, not an inheritor of it (even the album cover was done by Paul Ledney – Frank). The band is a side project of J. Gelso (PROFANATICA) and Lord Imperial (KRIEG). J. Gelso’s influence is so strong, though, that it’s difficult to hear anything of Imperial except in the vocals, which sound quite a bit like Paul Ledney’s. Strong too are the twisted, single-mindedly primitive Death Metal riffs and dry, Black Metal rasping; all that made, and continues to make PROFANATICA great. Burn your Bibles and invert your crosses; the time is nigh. More info at: www.myspace.com/unholyblackproductions, www.myspace.com/blackhousevoices, www.hellsheadbangers.com