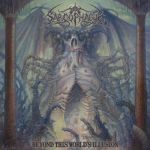 THE SARCOPHAGUS
Beyond This World's Illusion
(Satanath Records)
45:51min

Turkey, being in the cross road of Asia and Europe have always been the center point of history because of the infamous Ottoman Empire and for being the complex hotbed of tension between religion and secularism. Extreme Metal transcends in every corner of the known world but Turkey is not renowned for its Black Metal artistry. Throughout the years, there has certainly been a thin trickle of bands and other underground projects from the larger cities, but no-one would venture to call Turkey a big Black Metal nation. Defying all the odds, THE SARCOPHAGUS have been around for over 20 years and spreading the disease since in the deepest underground. In this period, they have produced one demo, two EPs and a debut full length which was released back in 2009, from Osmose Productions. After seven years of silence, they have recorded a new album called “Beyond This World’s Illusion”, which was mastered at Necromorbus Studio in Sweden and this time Satanath Records released this in cooperation with Death Portal Studio (USA), Fila Sophiae (Swe) and Sphera Noctis Records (Bra). The cover art was made by great visionary Paolo Girardi, which perfectly embodied the vision of nefarious and spirited Black Metal from Turkey. Even the production is clearly influenced by late 90s / early 2000s Swedish Black Metal, reminiscent of WATAIN through SETHERIAL and DARK FUNERAL, as well as DISSECTION’s “The Somberlain”; nonetheless this record beholds the mysterious and frenzied sound of another dimension. The opening of the album with ‘Reign Of Chaos’, the first song, gives introduction of the record with a composition quite typical of the group, a certain dose of fiery blast, mid- tempo with a break as well as a very exhilarating harmonious lead guitar. You will certainly feel that you have entered the passage of wrathful chaos. Going from there, ‘Ain Sof’ will offer a ceremonial and mystical atmosphere that’s truly malicious, with sounds used very evocative and enchanting. Moreover, ‘Ain Sof’ is a Kabbalistic term describing divinity as “The Endless One” or endless being. The sonic manifestation of the unchanging, eternal, and mysterious Ein Sof (infinity) will truly encapsulate you to the central of nonexistence. The next number ‘Dymadiel’ refers to anti-cosmic satanism and from the very beginning you will enter the absorbing ritualistic trance with pentacle, chalice, wand and dagger. This track has an uncompromising efficiency of being furious and profane with formidable rhythm, evolving around and a break linking with mid tempo variations. ‘The Profanity Rites’ is purely an ode to sorcery of vicious sacrifice ritual in the aspiration to channel a spell of destruction, with dissonant notes in arpeggios and tremolos all in an occult and ritual atmosphere. Enter thy zone and soaked with profane insanity. ‘Sapremia Of Earthly Creatures’ sounds like decomposing organic matter which easily shows utmost disdain against the mass. Few small keyboard notes also fantastically incorporated amidst the first and second third of the track which nothing but proves the intelligent songwriting capability of the creators. After the swirling terror; there comes the commendable ‘Triumphant Divine Terror’ which exposed the masquerade of religion and the carnages committed under the holy banner of light which always conveys nothing but pandemic and torment. The warlike atmosphere of complete chaos and devastation of this track is nothing but an invitation to confront the ‘Armoured Death’ or Death itself wearing armor. Initiating with a grim tonality and sirens whirled as nerve-wracking as invocation; before resuming the outburst of apocalyptic madness. Facing war and destruction of such monstrosity with ‘Flaming Key To Divine Wisdom’ it will return to a spiritual zone like the beginning of the album; with ambience and instrumentation of twisted melodicism you will delve deep into the realm of obscure knowledge and forbidden occult arts; which is actually receiving divine wisdom through total purification. At this point the ‘Apocalyptic Beast’ has come and marks the end of the album with forlorn manifestation of vengeance through reverberating melodies; like a fitting conclusion of all things declined and infested thus rematerializing through wisdom and spirituality. When everything faded to silence, I have felt that, “Beyond This World’s Illusion” is an absolute successor of its predecessor. Improved production and fascinating ritualistic musicality of these Turkish warriors made this truly an enthralling record while delivering their visions of anti-cosmic satanism, kabbalistic esotericism and occult wisdoms to address the complete degradation of humankind for fake beliefs, and inevitable bloody wars which in terms portrayed the horrid self-annihilation of the poor masses. Like the previous record, while keeping this pessimistic and abhorrent attitude towards humanity, thus praising and worshipping the great traditions of the past make THE SARCOPHAGUS certainly an admirable Black Metal entity in modern time. Listeners who seek the sonic capitulation of devastation and spirituality should have an experience with this release and praise such creation. Visit the band at: www.facebook.com/thesarcophagustr and listen at: www.satanath.com