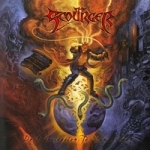 This is the second album from the Finland based band THE SCOURCER, a band which carries ex-members of bands as GANDALF, THE WAKE or DIVINE DECAY. To be perfectly honest, fans of melodic Death / Thrash Metal will surely like this album. It’s filled with cool melodies, cool guitarsolos, cool songs with a certain “mainstream” approach (e. g. ‘In The Hour Of Ruin’, ‘Never Bury The Hatchet’ or the title track), the music is tight played and includes a sound just the right one for this type of music. Fans of newer THE HAUNTED or CHILDREN OF BODOM won’t make a mistake in ordering this record. Others on the other side would complain their lack in originality and lack of own ideas. Once more it is a matter of taste, the quality on this record can not be found in its originality but what you get are 11 songs (plus 2 bonustracks) of modern sounding Death / Thrash Metal the way you hear it quite regular these days and the way so many fans are currently looking out for! An album which doesn’t hurt and which pleases the ears of fans from the above mentioned bands. Nothing more, nothing less. www.cyclone-empire.de