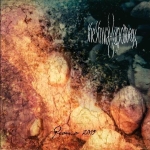 Formed in 2012, this blackened Death Metal band from the Netherlands has put together their first release… actually, a 3-song promo entitled “Promo 2015”. Little is known of the band members who simply go by their initials (MvS on vocals, JB on guitar, ML on bass and BN on drums). However, they seem like seasoned musicians who have been writing for years. The opener ‘Caduceus’ jumps right into a powerful beginning to a solid group of songs. MvS’ vocals scream in your face with no hesitation. Unfortunately, the second track ‘Praedormitium’ begins with robotic / demonic chanting which disrupts the flow from one song to the next. If bands could just stick with blasting our ears off without interruptions, the world as we know it would be a better place. Luckily, it doesn’t last long as it leads into another song worthy of inclusion on this promo. The last track ‘Maze Of Delusion’ continues the bludgeoning with no apologies. The guitars on all three tracks chug, crunch and reverberate madness as we all hope Metal will do. The drumming keeps the pace nicely, and the vocals grunt, growl and scream into our psyche until before we know it, the promo is over. The good thing is, like any other well-done group of songs, we want to hear more from this band. For more information, check out: www.facebook.com/theshivahypothesis, http://the-shiva-hypothesis.bandcamp.com