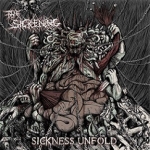 Usually, the “brutal Death Metal” tag waves me off completely, because I am pretty sure what to expect sound-wise. Sure I can name a few bands that I worship, such as SUFFOCATION, CRYPTOPSY, PYREXIA, DEEDS OF FLESH and SEPSISM. But those were Death Metal bands back in the day. Come the new millennium bringing along the “brutality”. Anyway, after making clear that new bands in that sub-genre usually don’t impress me, a few years ago and completely by accident, I heard “Death Devastation Decay”, THE SICKENING’s debut album from 2009. And hell was I impressed! These guys from Norway opted out from their country’s Black Metal tradition and put out a fierce Death Metal album with a great production and attitude (and the “tin-can” snare drum sound that I dig in this style of music!). And finally 6 years later, here is “Sickness Unfold”, their sophomore album. And let me tell you, the wait was worth every single minute. The album is a killer. The band keeps evolving and working on their identity. This time around they managed to include some slower passages that give the songs a much needed break. Too much blast beat and palm muted riffs can become tiring after some time. So they were clever enough to let album breath and set in, à la AUTOPSY, while keeping most of the other parts on their usual extreme settings. The sound on “Sickness Unfold” also reflects the actual state of the band. Although it is not as wild as on their debut album, the tightness and heaviness is more controlled and it helps define a lot of nuances that were unnoticed in their previous material. Beist keeps behind the drums, Neeraj on bass and now, guitarist Markspist is taking care of the vocals. These guys know their trade and execution wise, they are flawless with their instruments. There is a lot going on, but the catchy riffing and the ongoing groove (yes, even in this extreme setting) are the highlights of “Sickness Unfold”. A perfect example of a power trio that came up with 40 minutes of brain bashing Death Metal! Did I mention that the album also includes a cover version of ‘Abort (The Fetus)’ by VILE (US)? Recommended! You can contact the band here: www.facebook.com/pages/the-sickening/246063175435282. And get their album here: www.xtreemmusic.com