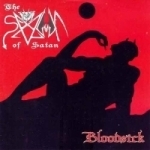 Damn, this is an excellent example of what a split CD should be – two bands, two individual styles sworn together by the same attitude – to be evil as hell!!! THE SPAWN OF SATAN fronted by NUNSLAUGHTER member Jim Sadist / Satanic attack with diversified Death / Thrash musically influenced by Thrash legends like old PESTILENCE, DESTRUCTION, old SLAYER, KREATOR etc. What I recognized as a positive surprise were the vocals, which remind me a lot of “The Tyrant” Kam Lee on MASSACRE’s first demo, excellent!!! The five songs on this split CD have the primitive evil feeling I love about 80s extreme Metal and THE SPAWN OF SATAN manage to recreate this unique unholy old school intensity in perfection. BLOODSICK are not worse than their partners in crime, but have a slightly different approach to evil Death / Thrash than THE SPAWN OF SATAN. The vocals are a bit more classic Thrash-screaming like NUCLEAR ASSAULT, early DEMOLITION HAMMER and the music has the drive of Death / Thrash, but the heavy sound of Swedish legends like GRAVE, NIHILIST. Sounds interesting, huh? Well, it definitely is! Although BLOODSICK’s five songs were recorded around 1997 they still sound extremely fresh, full of energy and kick fuckin’ ass!!! I guess when you like the bands I mentioned above you won’t be disappointed by this great CD, check your mailorders to get it or visit www.hellsheadbangers.com to purchase it from the label, which has a nice distrolist itself. Also watch out for the LP version which will be released this summer!