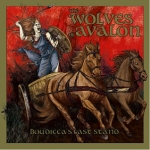 THE WOLVES OF AVALON from Hertfordshire in the UK have just released their second full-length album in their so far three year band history via Godreah Records. Metal Archives describes their style as Pagan Metal. These British guys have a very wide range of musical influences, which they mixed up to their own style. You can hear influences of Gothic Death Metal, Black Metal, Pagan, Folk or even Heavy and Speed Metal. The instrumentation range covers nearly all instruments, you can imagine to hear on a Metal album. Flutes, violins, cellos and accordion sounds accentuated by electric and acoustic guitars. Keyboard soundscapes as well as a wide vocal range between grunts, whispers and spoken passages. Also they use female vocals to keep it varied. The opening track ‘Famished Wolves Befogged With Blood’ is a really enjoyable taster with its succinctly used violin and reminds me of the early 90s Gothic Death movement, when the bands started to experiment with several influences and instruments, what made this genre very interesting in the beginning. After a short while the band really manages to capture the listener and take him back into dark medieval times. The variation in the speed between slow and quick played parts makes this album interesting to listen to and never gets boring. Production wise there is nothing to complain. All used instruments can be heared properly and nothing is overdone and all instruments are pitched out on the same level. The band closes the album with a cover of ‘Essence’ by ENSLAVED from their album "Ruun", which sounds like an own composition in the end. Interesting album to check out, if you like Pagan or Gothic / Death Metal. More info at: www.facebook.com/pages/the-wolves-of-avalon/160130990751861, www.godreah.com