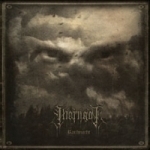 THORNGOTH is another German representative of the traditional type ‘S’ nordic Black Metal. The letter ‘S’ stands for Sweden and maybe also (as a small tribute) on behalf of famous cult acts like SETHERIAL, SORHIN etc. Their second album “Rauhnacht” is for sure not suitable for the next sunday tea party with your girlfriend’s parents because the massive sound wall is like an avalanche which is forcing everything out of his way. But after the first three songs – which are as typical as possible for this music (aggressive vocals, massive guitars) – you can see that the Bavarian band isn’t blindly following these traditional ways but tries to vary the style within the strict ‘rules’. THORNGOTH has released their debut “Thelema Of Destruction” two years ago via Northern Silence and they are another band (next to the Norwegian band ELITE) which found a new and maybe better home in Folter Records. Their second release “Rauhnacht” needs some patience before you are in the position to identify further structures and melodies behind the black sound wall but songs like ‘Der Wanderer’ are really worth to be explored. But only some songs are really impressing, the majority of the 8 songs are more or less standard Black Metal without any remarkable moment. But THORNGOTH is not a band without any potential and we will see what the future will bring – but this release is for sure not a key to higher grounds. www.folter666.de, www.thorngoth.de