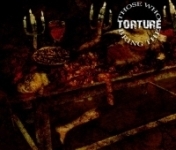 Members of RIBSPREADER, KNIFE IN CHRIST and TAEDEAT decided to form a new band, and shortly, after just one week of writing and recording, THOSE WHO BRING THE TORTURE are releasing their self-titled debut album. Midpaced Death Metal with many Grindcore influences may describe the style in a few words. Honestly I am little bit undecided about this album, the classical on the one hand, but on the on the other hand situation. Let’s start with my reservation concerning “Those Who Bring The Torture”. Does the Metal community really need another album like this one? Tunes that have been around like the early days of Death Metal and Grindcore, so I guess most, nearly all, who are reading this review have been on duty for quite a long time and therefore listened to suchlike album a great many times. Surely, I can understand the ambition and pleasure of musicians to play the music they like without being concerned about anything. But do we, the audience, necessarily need to listen to such music? In my eyes – no. So, let us now take a look to the “but on the other hand ” aspect. Well, I have been drinking coffee for a long time and it still tastes very well – the same goes for music like Death Metal and Grindcore. I just can not stop listening to those styles and even if a band is walking the so often roamed paths it is still enjoyable for me. The production is good and the musicians abilities are alright, so every time I listen to “Those Who Bring The Torture” it is quite enjoying for me. Summary: neutral or clinically seen a mediocre Death / Grind album, more or less just a rip-off of other, more well known acts like EXHUMED. Seen with the eyes of fan of the extreme music genre a good debut album, still better like most other Metal bands nowadays. Everyone is invited to make up his / her own opinion by visiting www.myspace.com/twbtt