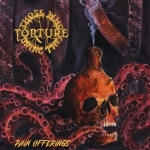 THOSE WHO BRING THE TORTURE
Pain Offerings
(Iron, Blood And Death Corporation)
31:52min

Rogga Johansson (vocals, guitars, bass) has been in a shitload of bands. Too many to name here. But he’s proven his worth while playing in a multitude of Metal genres. Brynjar Helgetun (drums) and Dennis Blomberg (lead guitars) also leave a trail of bands behind them. Since 2007, Kiruna, Sweden’s THOSE WHO BRING THE TORTURE have released six albums including the new one, "Pain Offerings", considering the responsibilities the members have to their other bands is impressive. And the genre of Death Metal is a better place with the band in it. ‘The Hangman And The Hanged’ starts the album with a mid-tempo, nicely-produced track as the guitars strum and chug along while Rogga belches the vocals out like a man possessed. ‘Another Victim Of Insanity’ is a thrashy mix of dual guitars and another mid-tempo song, while maintaining a form of Death Metal that punctures our ribs with a swift kick of its spiked boot. ‘Reality-Worst Show Ever’… what a damn fine song title! The guitars crunch like a full-throttle tank engine as the drums pound with pure fury. The fourth track ‘Endquester’ speeds things up a little, not that they ever really slowed down. I can’t say enough about the mix of the album. Every instrument, vocal and sound separate themselves evenly, none outweighing or overpowering the other. ‘Mental Meltdown’ sounds like exactly that as Rogga squeals and spits venom like a fucking madman. The title track ‘Pain Offerings’ is a more straightforward song, but continues to work its Metal magic into our minds. It’s definitely a fist-pumper. ‘Enter The Damned’ is a vicious, rapid-guitar, machine-gun-drummed amalgamation of angst and redemption. ‘Onwards To Termination’ is ripe for a sizeable pit… Dammit, if there’s no live show, just gather your friends and smash the living hell out of each other. The final track ‘Interlude Before The End’ is a classical-style instrumental that helps the album slither away to face another day. The nice thing about this album is it clocks in at around 32 minutes, just long enough to get your kicks without getting tired of it. THOSE WHO BRING THE TORTURE deliver a very solid, head-banging Death Metal album they can be proud of. For more information, check out www.facebook.com/ibdc666