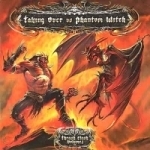 "Thrash Clash" is a rather fresh CD series from Stormspell Records, dedicated to new promising Thrash bands. The good thing about it is, that (so far) all of the bands have delivered their Thrash Metal in the classic old school style, which makes it even more enjoyable to me. The first edition features TAKING OVER and PHANTOM WITCH, two bands from the US. TAKING OVER is a young three-piece from San Bernardino, CA that was founded in 2007 and already went through a bunch of line-up changes. The first songs they recorded as a band (‘Sign Of Attack’ and ‘Prison Cell’) are also the ones to kick off this disc. When I first read their name I immediately thought of an OVERKILL influenced act (for obvious reasons), but that was totally wrong… This is way more simple, straight ahead and raw, almost Death/Thrash like, with vocals that often even recall VENOM’s good ol’ Cronos in his heydays. All of their songs on offer on this disc (5 in total) sound really fresh, do convince through solid musicianship and a clever, right into your face type songwriting. I’m really looking forward to hear some more material by this really promising act! Band number two on this CD is called PHANTOM WITCH and hails from Indianapolis, IN. They got together in late 2006 and seem to worship early SLAYER a lot! Remember INSANE from Italy? They used to put out a very cool album entitled "Wait And Pray" a couple of years ago… Well, this stuff here is along the same lines, with the main difference that PHANTOM WITCH have adopted riffing, leads and songstructures from "Show No Mercy" exclusively, while the vocals add their own unique note to it (no, the singer does not sound like Araya, but a bit cleaner). Unoriginal as fuck, yet totally entertaining for fans of very early SLAYER. The CD comes with a 12-pages booklet that includes band info and lyrics, as well as great artwork by Dimitar Nikolov and it is strictly limited to 1000, hand-numbered copies, so you better hurry up! All further info you may find at the following websites: www.myspace.com/takingoverfucks, www.myspace.com/phantomwitch, www.stormspell.com