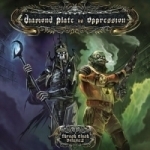 Chicago’s youngsters DIAMOND PLATE (they are just 15,3 years old in average!!) got together in March of 2004 and started to play their first shows in the summer of 2005. Just like most of the younger bands they also went through a couple of line-up changes until they recorded their first EP "Mountains Of Madness" which got released in January 2008. Musically DIAMOND PLATE could be best compared to those 80s Thrash acts that were rather close to the Hardcore scene from back then. The music is always very intense Thrash, while the vocals have got this little Hardcore touch to ’em and in that respect the band is probably closer to an act like EVIL DEAD than FORBIDDEN for example. OPPRESSION, the other band on this disc, hail from Falkenberg, Sweden. They were formed in 2002 and are the first European act to appear on the "Thrash Clash" series. The band has since then released 4 demos, been part of two split tapes and numerous compilations… Their style has evolved from a rather Hardcore / Death Metal type sound to pure old school Thrash in 2006, which is more than fine with me. Their first three songs on this CD have been taken from 2006’s "State Of War" release, while the following tracks (4-6) are from their "T.P.R.S." and "Left To Perish" releases (from 2005 and 2004 respectively). Judging the band by these contributions alone I’d say they made a cool progression as Nicklas Andreasson (the vocalist on the older material) sounded quite annoying to me, while Olof Wikstrand’s vocals are totally convincing and more in the vein of an aggressive Schmier with some great high pitched screams in the good old 80s style. Musically OPPRESSION deliver very Bay Area influenced type of material, with a dominant bass guitar and quite melodic leads. Unfortunately the band has already split-up again after a tour they did in Belgium and the UK in 2007, which is too bad, really. Just like "Thrash Clash" Vol.1 also this second edition is strictly limited to 1000, hand-numbered copies and comes with a 12-pages booklet, that features band info and lyrics, as well as another very cool artwork by Dimitar Nikolov. For more info check out these websites: www.myspace.com/diamondplate1, www.myspace.com/oppressionswe, www.stormspell.com