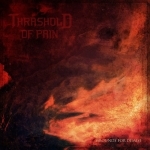 THRASHOLD OF PAIN
Grounds For Demise
(Risen From The Dust Productions)
25:52min

No mistake, the letter “a” instead of “e” is there with full intent. Because THRASHOLD OF PAIN are playing Thrash Metal. If this wordplay is clever or lame everyone has to decide for themselves. Musically the decision is more easy to make. After a short intro the band from Russia furiously starts and before you know it, the admittedly rather short playing time is over. Time to hit the repeat button, because THRASHOLD OF PAIN play with such an joy and both technical and songwriting skills. It is more modern Thrash Metal the band focuses on, but definitely no Groove or Neo-Thrash Metal and the band abstains from adding elements of other sub-genres. But that also means that there are no old school influences. Only the tracks ‘Wrong Way’ and ‘Wasteland’ are partly with clean vocals, but the overall result is far away from a crossover band like NEGATIVE SELF, for example. All in all “Grounds For Demise” does not keep what the title promises, because the album is for sure no reason for downfall. All Thrash Metal fans can found further information here www.facebook.com/thrasholdofpain or here https://vk.com/risenproductions