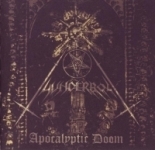 Professionally executed ’90s era inspired Black Metal, the second album by this Polish band released on Agonia Records. Sporting a very prominent, clear, yet solid production that to me seems to be absolutely wasted on this commonplace outing. Play-by-the-numbers songwriting definitely is the cancer within that is killing THUNDERBOLT. Speed for the sake of speed-laden tracks, coupled with majestic riffs when crucial. Then at other intervals the raw evil standards the more traditional among the hordes need, to the overly anticipated Thrash-like breakdowns and like minded lead guitar work. Nothing here presented is anything that we all haven’t heard before many, many times over and at the end of the album’s play I am left with the same empty feeling as when track 1 was over. The problem with THUNDERBOLT is that they do nothing in the way of being memorable. THUNDERBOLT play it safe and to play it safe in Black Metal equals getting lost amongst the hundreds of other bands all across the earth who play in the same manner. THUNDERBOLT = forgettable Black Metal (well, as so often, luckily tastes are different – and even though THUNDERBOLT definitely won’t reinvent the genre, I personally really enjoyed “Apocalyptic Doom” nevertheless, for it is very well executed, raw and stripped to the bone traditional Black Metal without any unnecessary additional gimmicks – Frank). www.agoniarecords.com