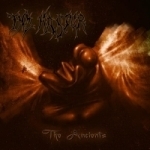 This time, we don’t have new stuff here, fresh from the pressing plant, but an album released in 2010 and even recorded in 2005. THY HASTUR are from a little town in Silesia in Poland and released three albums, "The Ancients“ being the most recent. Looking at the line-up, we find out that the band is more or less a one-man-project, lead by a guy called Mordor, supported by a keyboarder and an extra singer on three tracks. Honestly said – If I didn’t knew, I wouldn’t have recognized that… If you want to describe THY HASTURs style, you could roughly file them under symphonic Black Metal… You might also call it Dark Metal… Or boring keyboard-overcharged Wanna-Be-Metal. And it is just not only the fact, that the keyboards are getting on my nerves. It is also the missing Metal, the annoying programmed drums, the consequential flat sound and the left-out catchiness. No ideas, no flair, no charisma, no hooks – no album for me. If you’re still interested, go to: www.myspace.com/thyhastur or contact the record company at: vittivrecords@gmail.com