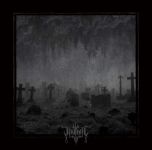 Even though the name THY LIGHT has not crossed my path yet, this Glasgow based project, that originally hails from Brazil, is not a new one in the scene. Originally, Paolo Bruno started to compose music under this moniker back in Brazil in 2005. Responsible for everything except the lyrics (that were written by Alex Witchfinder), he already recorded a full length demo and an album for the Chinese label Pest Productions. After a longer hiatus, Paolo restarted THY LIGHT after moving to Scotland. This self titled EP with two very long tracks of 17 resp. 19 minutes is his first sign of life after eight years. Like many, nearly all, one man projects, THY LIGHT can be filed in the vast genre of Atmospheric Black Metal. But years of activity and experience helped Paolo to sharpen the profile of THY LIGHT. Thus the two songs on this EP are pretty well balanced and rather laid back most of the time, creating a sound that is not too far away from newer WOLVES IN THE THRONE ROOM works. The long songs are full of solemn beats, keyboard laden arrangements and gloomy melodies. Few more metallic outbreaks, especially in ‘Infinite Stars Thereof’ help to bring some movement into the dark abysses. Yet the moody and laid back arrangements are predominant, making the second song ‘The Crossing Of The Great White Bear’ a little bit too tame in some moments, even though this one has great vibes as well. Those who are out for moody and solemn, yet still dark and gloomy music should give THY LIGHT a chance and visit either www.facebook.com/officialthylight, https://thylightofficial.bandcamp.com or www.facebook.com/talheimrecords