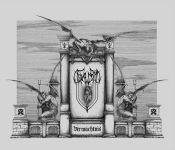 This Black Metal band from Germany is active for a pretty long time already. Formed in 2004 under the monicker KÄLTETOT, these guys released two demos entitled "Kältetot" in 2004 and "Demo 2005" in 2005. After a year THYRGRIM was chosen over KÄLTETOT and the band released the demo "Kältetot" in 2005 featuring a few tracks from the former demos. This was followed by a video "Live in Duisburg 2006" in 2006 and the albums "Winterhall" (2006), "Niedergang" (2008), "Monument" (2011), "Erwachen" (2014), "Dekaden" (2015), the compilation "Tysk Svart Metall!" (2016) on cassette and now "Vermächtnis" (2017). "Vermächtnis" features 11 tracks and has a decent production in the benefit of the guitars. The speed changes from blasts to tantalizing slow. Still I can’t be too enthusiastic about this one. Especially considering their previous work, it lacks power and anger. The vocals are the worst part. They’re raw but too monotonous and tormented without agression. After a few tracks they were getting on my nerves. The melodies were also lacking power and variation which made some tracks boring and drag on for too long. Occasionally there’s a decent riff but that fell short in the whole context. If it was the intention to bring the listener to despair with pain and frustration, than it succeeded. Listen first and decide for yourself. For more info check www.facebook.com/thyrgrim, www.trollzorn.de