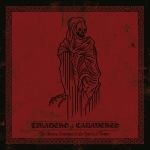 Mexican Death Metal, dark wicked grimy Mexican Death Metal is what this one man band spews in our face. TIRADERO DE CADAVERES is a new encounter for me, which makes a bit sense, as the band, before this debut full length release, only has released two singles, from this very album. The approach is dark and raw, with a good sense of Black Metal mysticism and atmosphere into it, and I guess it is the dark and eerie, quite wicked and crooked atmosphere that holds this release interesting. The rhythm patterns are quite chaotic and all over the place, the same goes for the basic song structures. The vocals are deep and guttural, which fits the overall output of the album quite good. Though without the interesting fills with atmospheres, that latches on, the album would have been even more all over the place. There is a certain charm over this album. It is a tad too raw and unorganised to be really good. There are way too many things happening a lot of times, there are no lines in the song structures, it is quite chaotic, in a messy way, though the darkness and mysticism have kept me listening to this album, many more times than I expected, when I first laid ears onto it. This is quite interesting in some strange ways. Enter the burning moon sickness: www.facebook.com/tiraderodecadaveresmx, www.facebook.com/ibdc666