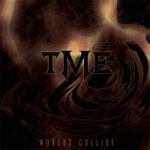 Modern Thrash / Death Metal in the wake of fellow countrymen DEFLESHED, DENATA or Japan’s KING’S EVIL. “Worlds Collide” is comprised of ten expertly written and executed songs professionally recorded at both Deadsound Studios and the notorious Black Lodge Studio. Those that know of the final products from these places, know that it can only mean one thing. A very promising result is thus offered here! This is true for the most part with “Worlds Collide” yet funny enough; my only real complaint about this album however, lies with the recording of the lead vocals and lead guitars. Both were not handled well behind the board and of these two points, the lead vocals are the worst. Almost completely buried in the final mix! Nils Johansson and TME did the mixing and mastering of this album at the Ballerina Audio. So I hope the band will take more care and notice of these particular flaws and get them corrected for their sophomore release. However that being said, have no allusions this is indeed a strong first album attempt! Worth every cent of your hard earned cash and honestly with the right production next time, the right promotion and tour positioning. TME could easily garner a substantial following almost over night. Featuring members of FISSION, VINTERSOG and SEASONS OF STORMS. Contact: T-M-E@hotmail.com or the band’s soon to be website www.generation666.com or the label at www.aphoticrecords.net