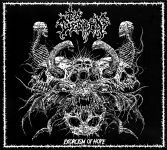 A Mark Riddick cover and old school Death Metal. This combination has become well-known during the last years. Just in case anyone is suffering from boredom, try to figure out how many covers / logos / posters Mark Riddick has drawn. At some moments I have a feeling of overkill and excess of this assemblage. There are countless releases and I have full understanding for anyone who is bored and tired. But on the other hand if the music and cover is on a level like the first full-length by TO DESCEND I still like it. A charming mixture of Swedish Death Metal and AUTOPSY influenced carnage, a brutal vocalist who tries not just to grunt, but to intersperse a bit variety and a dry as fuck production. Nothing special, but well-done and therefore equivalent to the German school grade “good”. Which means all normal requirements are met, the enthusiasm for the topic is evident and the only minor or forgivable defect are the missing highlights in form of catchy songs. Only two questions are left I can not answer. The first one deals with the label – on the Facebook page the band announces the debut via a different label and title. The second one is the line-up. Metal Archives lists threee members, but on Facebook the band announces three new members, which leads to six. But on the band photo there are only five members. I have written to the band with the request for clarification, but no answer up to now. By the way, one member is the well-known Rogga Johansson, and amongst his bazillion bands / projects there are plenty which sound lame and spiritless to me. But not in this case. Well, at the end of the day each one must decide on his / her own, whether another cliche breathing prototypical Death Metal release is worth spending time and money on, or not. As usual the best advise is to make up your own opinion by visiting www.facebook.com/todescend and www.facebook.com/ibdc666