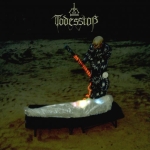 The Italian label I, Voidhanger Records is more and more specialized in producing dark, experimental and unorthodox Doom, Black and Death Metal bands that crowd the underground from every corner of the world. Two years ago, they brought to light (actually, to darkness!) the seventh album of TODESSTOSS, called "Hirngemeer", behind which there was the multi-instrumentalist, poet and painter Martin Lang. "Ebne Graun" is so, the second step of this collaboration. I didn’t know the rest of their discography, so I’ll consider this album without looking at their past. If "Hirngeemer" lasts over seventy-fifth minutes divided in three tracks, "Ebne Graun" consists of one song of more than forty-six minutes, a continuous trip of ritualistic and hallucinonenic music. It’s not really fitting to describe TODESSTOSS as a Black Metal band, it’s different than BURZUM or BETHLEHEM for example, so maybe another term to sub-label them would be useful but not so important. It’s obvious that the aim of this project is to be out of boundaries and pre-established frameworks. As the meaning of the monicker TODESSTOSS (German word for Death flow) evokes, in addition of the visual art of Lang, expressed in the artwork, "Ebne Graun" materializes the absurdity, with scary, crumbling sounds and terrifying screams. The guitar riffing of Martin Lang is repetitive and oppressive, expanded with Folk percussions and twists of synthesizer. The songwriting is improved by the bass lines of Euer Gnaden, while the psychotic vocals of Flesh of L. complete the horrific and abstracted scenario. "Ebne Graun" is not an easy listening, it’s something to experience maybe under effect of some drugs. Give them a chance. More information at www.traumorgane.de and www.i-voidhanger.com.