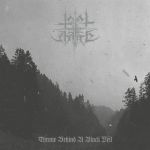 Raw German Black Metal on a rainy Wednesday, at least if you’re situated in the north of Denmark! This is the band’s fifth full length album, and they’ve been through a great progression from the early days of grim, raw and quite primitive Scandinavian styled Black Metal until now, where the music has become quite more nuanced and catchy. TOTAL HATE has, through the years, incorporated more thrashy guitar riffing into the songstructures, together with the blazingly cold melodic inspiration from the second wave of Scandinavian Black Metal, topped with a good and healthy passion for BATHORY. There is some good riffing, some great atmospheres, good pace changes, and quite much variation throughout the eight tracks. And personally I’m asucker for the wicked screams from the frontman, which more the less, always is fitting for the summoned atmosphere throughout the songs. The production is a tad too clean for my taste, for music as this, a tad rawness wouldn’t have been bad, and would have suited especially the drum sound. We are in an age where not much new is offered upon the table of music, as most has been tried in one way or another, though this is still a solid Black Metal album, that will accompany the long, stormy, dark autumn nights perfectly! Enter the eternal fire at: www.facebook.com/totalhate666, label contact: www.eisenton.de